My Most Unforgettable Character

In years past Reader’s Digest magazine had a regular contributory feature called My Most Unforgettable Character. These articles were brief profiles or character sketches of some famous and not-so-famous individuals. For whatever reason, the personae of these particular individuals would leave an indelible impression upon the contributing writers. This is about a very real person.

In conjunction with his actual role, his name alone has an almost comic book quality to it. He was my top-kick, my U. S. Army Basic Training Company’s First Sergeant. While many people compile lists of aptronyms, that is, names that are seen as humorously appropriate to their professions or claim to fame, to anyone who has undergone rigorous military training, his is the more cogently descriptive. If one were to gather together a thousand of the best Hollywood script writers they could not dream up a better name for a head Drill Instructor. It seems too good to be true, yet is. You can’t make this shit up, kids. His name was Sergeant Thorn.

It wasn’t so much about what it was that he said that made him so memorable, but the way that he said it. In the polyglot world of the Army, there is a tendency for everyone to pick up a slightly southern drawl. I never learned his background but he sounded as though he hailed from somewhere south of the Mason-Dixon Line. His tone gave the impression that his jaw didn’t just move up and down but moved side-to-side as well; sort of swinging down to one side and back up the other. Somewhere between a tenor and bass, when he spoke he did not strain or shout, nor did he appear to be angry. In addressing a company mass formation where he stood in front and you in back, his words came to your ears as if he were standing nose-to-nose right before you, unmuffled by the rows of men’s bodies intervening. His voice could be best described as clear, voluminous and especially, penetrating. Penetrating in the sense that, not only did you hear his words distinctly, but even felt them as well. You felt them reverberate in the ebb and flow of the air in your lungs; you felt them in your gut; you even felt them right down in your scrotum.

His pronouncements were brief, pithy, and to the point, and fairly dripping with implication. He said what he meant and meant what he said. He told us what he was going to do and did just that. His tone had an air of absolute certainty and assurance. The task before him was to instill within each of us an understanding and belief in “The Military Mind”. This mind set is summarized in the simple statement:

“There are three ways to do anything: The Right Way, The Wrong Way, and The Army Way.”

“The Army Way” is obedience as reflex. Since, as he put it: “There’s no doubt in my Military Mind…” there was to be no doubt in ours. Instant obedience to command was not only the best way, but the only way to live – and to survive.

“Trainee” he would say, (He addressed us, a hundred strong, in the singular.)

And he did just exactly that.

It was as though we had passed through a long dark tunnel, where first, we were stripped of our individuality and personal identity, that was the “tear down” part; and when we finally came out, we emerged as automatons – as soldiers; that was the “build up” part.

In recent times the United States Army has made use of the slogan: “An Army of One”. To some, this might conjure an image of a forlorn soldier bearing the entire weight of war on his shoulders – the lone warrior or the last man standing. But to The Military Mind, it implies unison: legions moving as one.

While I cannot say how many soldiers Sergeant Thorn actually trained in the course of his career, he would take a hundred of us free thinkers and cause us to think and to act as one. He convinced us that we were part of the greatest military power on earth and we were upholding a tradition of success in combat – an historically unbroken record of military victory. We could move mountains. We were unstoppable.

And he did just exactly that.

Traditionally, and by reputation, D. I.’s (Drill Instructors), cockily strutting about in their broad brimmed campaign hats, are a tough-as-nails, no-nonsense bunch. As outwardly and vociferously expressed, a typical D. I.’s narrow emotional range generally moved from impatience to disappointment to disgust to outright anger in a flash. They shouted their orders and were quick to step up and deliver withering invective and indecent insults right to your face. But all the D. I.’s who served under Sergeant Thorn displayed a broader range of emotions than he ever did. From time to time they might reveal a sense of humor or even a glimmer of concern. Not so with Sergeant Thorn. He was an iconic expression of cold resolve. There was something medieval or timeless in his tone and bearing that made him appear to be more than just a man’s man or even a soldier’s soldier. He was a warrior’s warrior. His apparently unshakable conviction that war is the way of the world was inspirational to all and he met that conviction with stoical courage. To this young man, his heroic character was a thing to be aspired to. Some days I’d wished I could be more like him, but now, mostly, not.

Basic training finally came to an end. On Graduation Day we stood in formation in our dress green (Class A) uniforms preparing to march to the parade field to Pass in Review. One of the D. I.’s, my platoon sergeant, came up, and in a fatherly gesture, straightened my tie. The look in his eyes (and all the D. I.’s really) was a mixture of both pride and sorrow. For it was they who knew, even better than we, that we were going off to war and that some of us would never return.

As for Sergeant Thorn – he never broke character. He never betrayed any emotion. At that point it would have probably been a grievous sin for him even to do so. He was not a father figure.

Given the impression he made upon me, I think him immortal. Not that he was deathless; but that he’d died many times only to be reincarnated again and again. I fancy that he rode as a Companion to Alexander; that he marched with the legions of Caesar and kept the lines straight and fell in many a battle. At Valley Forge when his enlistment was up he stayed on – only to fall once again at Gettysburg.

And D-Day was a real possibility. 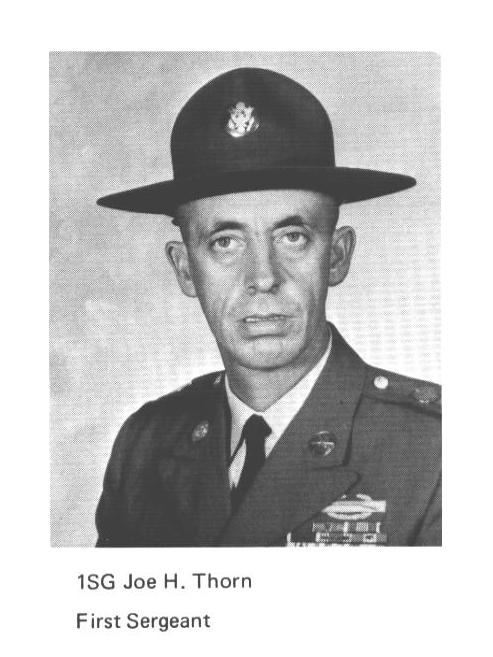