They must be Deaf: Not so much as The Courtesy of a Reply

The Following is a copy of an earnest email message I sent to the Mayor and Common Council of the City of Milwaukee last year. In return I did not receive a response from any of them and not even so much as the courtesy of a reply acknowledging the receipt of it.

Once upon a time, late on a warm summer’s night, as I sat at the kitchen table quietly reading the day’s neglected newspaper with nothing there to break the silence except the soothing and familiar sound of a cricket chorus wafting softly through the darkened screen of an open window; I discerned yet another sound. At first I couldn’t quite identify it as it sounded somewhat metallic and intermittent, like a hand-held power saw, and thought how rude it was for my neighbor to be working on a home improvement project so late into the night. But as I focused my attention I realized it was not a saw at all. A lucky cricket had alighted on my neighbor’s downspout. The acoustics of the thing magnified his chirping at least a hundred fold. Satisfied with my detective work I went back to the paper only to discover I could no longer concentrate to read. Unlike all the other crickets, his chirping was just a bit too loud. I went outside and listened further, and normally when one approaches crickets they tend to lapse back into silence, but not this one, he seemed quite pleased with himself. So I smashed him.

You can thank me now or you can thank me later, because, you see, his chirping was a courtship call. If he’d succeeded, as evolution dictates, his young (and many offspring), swarming, crowded onto all the downspouts, would right now have you people climbing up the wall.

I’ve done for you, this boon, this favor, now you owe me one; to seriously consider my proposal of a new and more restrictive ordinance concerning noise.

This was my response to a noisy neighborhood on Labor Day, 2009. I submitted this to JSOnline.com. Of course, they never published it. I also called the Police:

Swift Justice. Confiscate the noisemakers on the spot: all sound amplification equipment; abused car horns; car alarms. Two Police Officers; One Mechanic; One Civilian Witness randomly chosen from the Jury Pool to ride along and direct the team for a single day. The Officers detain and write up the perpetrator while the Mechanic removes and destroys the noisemaker on the spot. No monetary fine. No arrest. No trial. Let them sue. We have an unbiased Witness. The cost of replacing the noisemaker is the fine.

When the cat’s away, the mice will play. The minute the cops leave they defiantly turn the noise back up. 99% of the time a car horn is used both inappropriately and illegally. An automobile horn is a warning device. It is for safety. It is not a doorbell, a musical instrument, a cattle prod, or a device to signal your friends hello.

Only silent car alarms should be legal.

Swift Justice. Big Hammer. Communicate the law. The noise level in this city is a harbinger of Civilization’s decay.

The ability to twist a volume knob is not musical talent. The size of your amplifier is not the measure of a man. That’s just pathetic.

Having read the pertinent city ordinances I see that confiscation of the offending equipment is already on the books. The confiscation and destruction of said equipment is still too complex and too far down in the legal procedure. A private citizen should not have to be called upon to launch an eradication campaign against specific individuals.

When I say “Swift Justice” and “Big Hammer” I mean the destruction of the noisemaker right before their eyes and right on the spot.

When I say a “Civilian Witness” I mean a person not on the city payroll, chosen at random from the Jury Pool for a single day. There would be many who would willingly volunteer for such a task. There would be no need for a vindictive curmudgeon as ordinary people find the noise so intensely annoying and downright sickening. (And yes, it is physically sickening.)

When I say “Communicate the Law” I mean that I see absolutely no mechanism in place for making city ordinances known to the entire population of the city. It is said that “Ignorance of the law is no excuse.” But perhaps more people would obey the law if only they knew the law.

In changing any city ordinance place a notice in the Water Bill or the Tax Assessment. Advertise.

Cities across the country and around the world are grappling with this very same noise pollution problem. I say: be a leader.

If you are unaware of all the implications of amplified sound and the destructive nature of it I suggest you educate yourself. Amplified Sound causes Physical (Anatomical), Psychological, Social and Structural damage. The Internet has a plethora of pertinent information. I include only a few links:

Memorex entered the consumer media business in 1971 first with its “shattering glass” advertisements and then with a series of famous television commercials featuring Ella Fitzgerald. In the commercials she would sing a note that shattered a glass while being recorded to a Memorex audio cassette. The tape was played back and the recording also broke the glass, asking “Is it live, or is it Memorex?”

Realize that sound amplification on the street is competitive. It’s not just the shiny cars and chrome wheels but how much noise they can make. Cruising is a base and perverted form of courtship display.

With few exceptions, most offenders are male. Like confused stags they wander the streets bugling their loneliness with weapons-grade amplifiers to the public-at-large. It’s all about sex. I say it is perverted because in the natural world courtship displays are done in the presence of a particular female; and while I’d be the first to admit I’m a right handsome fellow, I find it particularly annoying to be courted myself by these nitwits.

If you have any doubts about the sexual component of this courtship display, let me first say that I studied psychology at Kansas State University in 1970 and everything I’ve learned about human behavior since then tells me it is so. To allay any doubt in your mind concerning this, consider: that some of these vehicles are actually sporting chrome testicles. While you won’t find much on the Internet by way of mature discussion on the topic it is a base and perverted courtship display.

When these individuals drive by you can see by the expression on their faces that they are pleased by the annoyance they cause. My understanding of human psychology tells me it will only get worse.

You might disagree at this point in time but eventually the situation will deteriorate to a point were you yourself will say “I’ve had enough.” I guarantee it.

When a vehicle drives by a half-block away and rattles the windows of your house that is trespassing by its most fundamental definition. How would you like it if I kicked in your door in the middle of the night, roused you from sleeping and shouted in your ear?

There is no racial component to this issue. I’ve seen signage in Spanish calling for quiet and blacks too, complain.

I won’t touch upon structural damage or health concerns here, but I’m willing to discuss them at length.

Don’t let any jackass judge or idiot lawyer tell you it’s protected by the Constitution, either.

Washington and Jefferson couldn’t have imagined the steam engine much less the dangers of amplified sound.

Amplified Sound can sicken, injure, and can even kill.

I was born in Milwaukee and this tired city has a reputation of not being a good place to raise your kids.

The police and the teachers want to move out. Why not throw up a wall around it and call it what it is?

If the police can take firecrackers from a child they can confiscate an amplifier from an adolescent punk.

My house is vibrating even as I write. Enough! 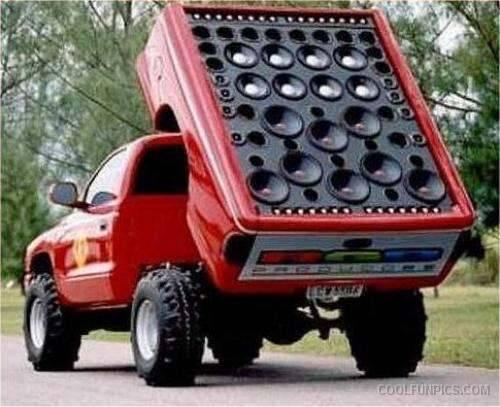