Having studied psychology at Kansas State University I came away with a number of things that stuck with me over the years. One was the idea that psychology is based, actually rooted, in biology.

Another idea that stuck with me was a now classic experiment we discussed in great depth. It involved two white lab rats (the laboratory rats are bred for consistent physical qualities in experimentation). The experiment was a demonstration of the “flight or fight” principle. (flight is always the first option) Two lab rats were placed in a small cage, the floor of which was covered with a wire grid. A mild electrical current was applied to the wire grid.

The cage, a tightly confined space, prevented flight as an option for the rats. Thus cornered and stressed by the electrical shock, they turned and fought with each other. Since neither could flee, they fought. And since they could not fight against the cage or the overriding authority and control it represented they turned on each other.

And what has this experiment to do with domestic violence?

Domination: the exercise of control or influence over someone or something, or the state of being so controlled.

Domain: an area of territory owned or controlled by a ruler or government.

Domicile: a person’s residence or home.

Domestic: of or relating to the running of a home or to family relations.

I part company with most dictionary definitions of violence as they refer only to the physical aspect of violence or domination. They give short shrift to the more subtle forms of violence.

I define violence as the imposition of ones’ will upon that of another.

Akin to violence is the equally subtle biblical term: “trespassing“:

“And forgive us our trespasses, even as we forgive them which trespass us.” – Tyndale New Testament, Matthew 6:12

Trespassing is much more than kids playing on their neighbor’s lawn or someone entering another’s property unbidden. In any discourse regarding domestic violence one may well refer to it as a form of rebellion. It is rebellion against the master of the domicile. 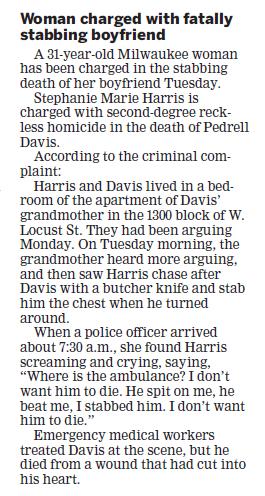 Having studied logic at university I am aware that most people don’t know the difference between an argument and a fight; neither do they recognize the benefit to be derived from losing an argument.

Having studied mass communications I am aware that most people don’t recognize the adulterous, unnatural and unholy presence of the domineering and dictatorial Alpha Male Mass Media in their own home.

And like the lab rats above, most people lack the most basic logistical or economic wherewithal to simply flee domestic discord. So they fight. They fight amongst themselves. They struggle for domination within the home. They either do not or cannot rebel against the powers – the authority – the tyranny that cages them there.

With every child’s birth, ignorance is born again; and, historically, domestic violence has always existed to some extent. There is no universal cultural institution that teaches otherwise.

In some households there is no domestic violence.

Anecdotally, in my fathers’ house he was the absolute master and unchallenged final authority in all matters great and small. Not wishing to distort things, there were only a few times in my own recollection where he felt compelled to re-assert his God-given authority like a circus lion tamer (he had nine children) wielding a handy razor strop or his belt.

In the main however, it was my mother who enforced the rules with a paddle or wooden spoon and using my fathers’ authority to good effect, whispering in our ears:

“Just wait ’til the old man gets home”.

One may well argue that, in a perfect world, corporal punishment would be unnecessary so long as authority is well established and maintained, but each and every child has an expansive ego, and in child development it is the parents who formulate and provide the superego or conscience to the child. That is a parents’ duty. The superego sets limits upon the ego and endures long after the parents have passed.

As for my fathers’ house: in all their years of marriage my father never once raised his hand against my mother. That was in part due to her Catholic up-bringing and the fact that she always recognized his as the final authority. My father, being human, lost his temper from time to time; and when he did my mother fell silent with downcast eyes, being in utter subjection. (1 Peter 3)

From the mid-20th century onward all statistical reports show a rapid increase in divorce in the United States which is in turn indicative of simmering domestic discord. To what may we attribute this phenomenon?

The adulterous presence of the mass media is domestic violence. Are they family? Are they even friends? Of course not. Whether it be a simple sales pitch, political propaganda or a full-blown brainwashing campaign (a sit-com written verbatim at your expense) they are in your home to bend you to their will. And you can’t even do so much as talk back to them.

All societies are hierarchical in nature. They must be in order to function. So too, is it, with families. Armies have both generals and foot soldiers. That is their fixed relationship. It is through that very hierarchy they are able to successfully function in unison.

In the sharing of shelter (the domicile) be it a great manse, a modest cottage, or even the smallest apartment, social order must be both recognized and maintained.

In the ancient tradition (of fuzzy origin) wherein a man carried his bride over the threshold, steeped as it is in superstition and suggestive of a mock kidnapping, a precedent is symbolically established as to who is indeed the master of the house. The bride never carries the groom.

The state, that is to say the government and law enforcement, must recognize the hierarchy within each and every shared domicile.

If I were in law enforcement – if I were a police officer dispatched to a domestic violence call, the first question I would ask is:

“Who is the head of this household?”

And once the head of the household is clearly identified I would arrest or at least remove everyone else. It is, after all, the quelling of a rebellion.

Brainwashed, programmed, and even assertiveness trained; egged on by the ever-present Alpha Male media; employed for the sake of capitalist profit (up-ending any traditional economic dependency relationship) and allowed by liberals to co-habit for the convenience of real estate moguls, the “liberated” woman who retches at the very mention of “obey” and turns every minor disagreement into a psychological struggle for dominance and control that literally results in a knife fight in a phone booth.

Domestic violence is directed first at the master of the domicile.

If there is no master established, or even if there is and his co-inhabitants are in a constant state of rebellion – chaos reigns.

The purpose of culture is to bring order out of chaos; but capitalists don’t give a damn about your culture. They will arrest the man because in a physical fight a woman usually gets the worst of it (as do children). They may provide a “shelter for battered women” but that utterly fails to address the issue of the hierarchy within every shoebox domicile. Politicians are either idiots or puppets making excuses for why things must be the way they are.

The analogy of the lab rats turning on each other is entirely apt because there is no established social hierarchy there.

One could rephrase it:

instead of calling it “Domestic Violence” call it plainly “violence within the domicile.”

In my father’s house he was the master; and, as a man, why should I or would I settle for anything less?

It is easy for me to say:

“I am captain of my ship; I am king of my castle; I am master of all I survey”.

But life is chaotic and uncertain; contingencies abound – so even if and especially if you find yourself living in a socio-economic trap or other psychological cage with someone else – know beforehand who the master is.

Surely, I’d like nothing better than to be a hero and put an end to domestic violence once and for all; but it just seems to me that an elegant solution to the problem was found a very long time ago and then lost once again.

Who is the head of your household?